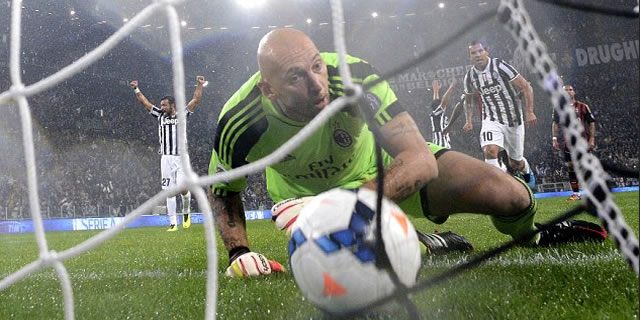 Napoli are considered slight 21/20 favourites to beat AC Milan on Saturday night whilst Fiorentina look to boost their European ambitions when they host Atalanta in Florence.

Although Napoli are leading the race for the final Champions League spot, they will need to get a good result against AC Milan if they are to keep ahead of the chasing pack.
After a stellar start to the campaign, Napoli has cooled off in the last couple of weeks which has seen them fall to a distant third in the table and embroiled in a fight for the final Champions League spot.

As per usual, Rafael Benitez finds himself without the trio of Valon Behrami, Camilo Zuniga and Giandomenico Mesto who are all still on the injury list.

Aside from that, there are no other fitness concerns for Napoli who will likely stick with the same side that lost to Roma in the cup on Wednesday night.

Since Clarence Seedorf took over as head coach, AC Milan are back to their best having not lost their last three games although the Rossonieri are still sitting in a lowly 10th position in the table.

There could be some reinforcements arriving in the Milan attack for the trip to the Stadio San Paolo as Mario Balotelli is back from suspension and expected to start on Saturday night.

He is likely to come in for Stephan El Shaarawy who is a doubt for the game as he battles several niggling injuries sustained over the past few weeks.

Should Napoli lose, it means that Fiorentina could climb into third if they are able to defeat a confident Atalanta side at the Stadio Artemio Franchi.

Fiorentina are just three points off Napoli in fourth and a victory would elevate them into third should AC Milan prove victorious in the other big game.

After impressing last week, Modibo Diakite is expected to retain his place in the back four whilst Mario Gomez could return after missing the last couple of fixtures through injury.

Atalanta have been inconsistent for much of the season but their win against Napoli last weekend shows that the Bergamo side have more talent than their 12th place suggests.

Ahead of the trip south, the visitors will be without experienced centre-back Mario Yepes for the game although dynamic midfielder Luca Cigarini is expected to return after missing several games through injury.

With the second half of the season well underway, it means that Napoli will need to get results in the big games against the likes of AC Milan if they want to prevent sides such as Fiorentina from stealing their European dreams.