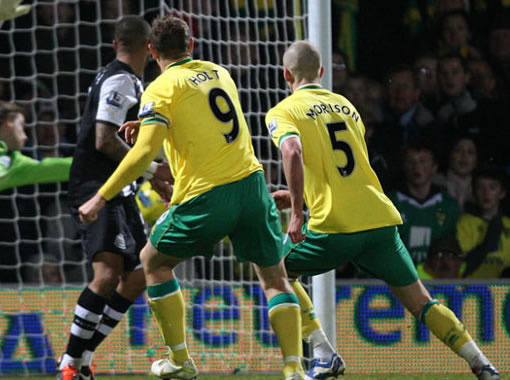 Norwich have been something of a surprise package this season. A surprise to many, but not to their own supporters who were convinced that the likes of Grant Holt and Wes Hoolahan would be more than capable of stepping up to the Premier League.

Their 4-2 win over this weekend’s opponents, Newcastle, back in December epitomised that belief and desire, and it is no surprise that they now find themselves 14 points clear of the bottom three with just ten games of the season remaining.

A 1-1 draw with Wigan last weekend will no doubt have come as a disappointment to many involved with the club, but it is testament to how far they have come in the past two seasons that they do feel they should be winning such a game.

Bluesq have been in touch to tell us they will kindly offer free bets worth £25/€25 to all Footybunker.com customers to spend on any football fixture this week, including the weekend Premiership! Pick up your exclusive £25/€25 with Bluesq here! Be quick – limited offer!

Their 7-1 defeat to Colchester in League One, less than three seasons ago proved to be the turning point, with manager Paul Lambert being poached from the Essex club and a string of fine results helping them to back to back promotions.

Newcastle have a similar story to tell. While Norwich were beginning their season in the third tier of English football, the Magpies were working towards a Championship promotion campaign, having been relegated from the top flight after seasons of mediocrity just months before.

Now they find themselves just outside the Champions’ League places with a very real chance of bringing European football back to the North East next season.

However, a heart-breaking defeat to Arsenal in their last outing extended their run without a win in the league to four games, so they will be keen to put things right in front of their own fans on Sunday.

It has all the ingredients to be a good old fashioned, exciting Premier League game between two of English football’s most well known and respected clubs.

It gets underway at 4pm on Sunday afternoon.