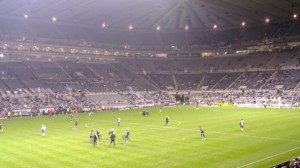 What a start to the season it has been for Newcastle United. Within the first eleven Premier League fixtures one could sense that Alan Pardew was beginning to build a Newcastle side capable of upsetting the “top four” and making their way to the Champions League group stages.

With some great wins against the likes of Everton, Sunderland and Wigan, coupled with some hard earned draws against Arsenal, Tottenham Hotspur, Aston Villa and Manchester United the top four is still within their grasp. Only two losses thus far has seen the Magpies slip down to seventh, with those coming unluckily at Manchester City and then in what was a great match for anyone, against Norwich City where they lost 4-2.

Pardew and his assembled Newcastle United squad will realise though that there is still a lot of work to do but that the Champions League is not as far away as many will have thought. Their defence has suffered of late but where goals are concerned they always have enough chances to put at least one away.

Their last few fixtures have been difficult, both on paper and on the field and a lot will will rest on how well they cope after the defeats to Chelsea and Norwich. A repeat of early season form will see them rise once again into the top four and with two home games against Swansea City and West Brom, followed by an away day at the very poor Bolton Wanderers could see them begin to charge back up the table.

The importance of three wins from these next three games should hold them in good stead and with Anfield away on New Years Eve, those nine points could see Newcastle United requiring only a draw to still be in with a very good chance of Champions League qualification.