Home » Football » Arsenal » Not signing defender will be a risk, says Wenger

Not signing defender will be a risk, says Wenger

Arsenal manager Arsene Wenger says it would be a gamble if the Gunners did not to bring in a new defender this month but that his side would cope.

The Gunners have frequently been left short of defensive cover this season with the likes of Laurent Koscielny, Kieran Gibbs, Nacho Monreal and Mathieu Debuchy all suffering injuries.

“It is risky [not to sign anyone] – too risky. If we have another injury or two we will struggle.” said Wenger.

As, Debuchy is expected to be out for another three months after surgery on his right shoulder, leaving Wenger with only six fit senior defenders at the club. 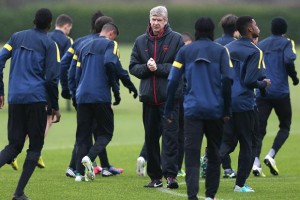 The Frenchman whose side beat Manchester City 2-0 yesterday said that they can manage because they have [Calum] Chambers, [Per] Mertesacker, Koscielny.

The Gunners have been linked with a number of central defenders in the January transfer window, including West Ham’s Winston Reid and Borussia Dortmund’s Mats Hummels, but their gaffer Wenger says it is difficult to sign quality players.

Wenger added that it is not a supermarket where you go in and buy a defender. It is a market that is very restricted. The players who can strengthen the best 10 teams in Europe, you don’t find many and it is the same for everybody.