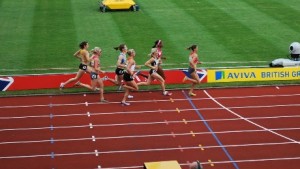 Runner Jemma Simpson has suffered a major blow in her attempts to represent Great Britain in next years London Olympics after losing her appeal after against her funding cut.

The 27-year-old lost her lottery funding after she was dropped from the list of British athletes who receive it after suffering an injury hampered 2011 season.

A panel which included UK Athletics head coach Charles van Commenee decided that Simpson was no longer eligible for funding and the runner feels her previous performances were not taken into account..

“He said that before the decision was made to exit me from funding, the panel revisited my case a number of times,” She said.

“It ultimately came down to opinion, the panel took a vote and it went against me. In my appeal I mentioned my world merit rankings being in the top 10 in 2009 and 2010.

Simpson added: “I mentioned the average age of all 800m finalists from the last two Olympics and 2007 and 2009 World Championships being predominantly aged 28-32.

“By that age they are physiologically developed enough to cope with the rounds.

“I also noted that I am coming into that age bracket and have been working on developing that aspect of my training over the last couple of years.”

Funding was given to Marilyn Okoro, Jenny Meadows and Emma Jackson ahead of Simpson and the runner is mulling over whether to appeal the decision which could hamper her chances of competing for team GB in London 2012.

“If I decide to take this further it will impinge on my preparation. With less than a year to the Games this is a stress I don’t need.

“My other option is to focus my energy on training harder than ever and look to build a longer lasting relationship with a private sponsor.”