Liverpool winger Oussama Assaidi is on the verge of completing a move to Al-Ahli in the coming days, as the Reds look to off load the Moroccan for a fee in the region of £4.7 million, according to reports in England.

Assaidi has struggled for game time at Liverpool since his £2.4 million move to the club from Heerenveen in the summer of 2012, in what was Brendan Rodgers’ first summer in charge.

The Moroccan was a big hit at the Britannia Stadium following his loan move to Stoke last season, in which he spent the entire campaign.

The Stoke snapped up the winger on loan again this season, but he has failed to recreate the sort of form he showed last season and the club have cancelled his loan to allow him to complete his switch to Dubai. 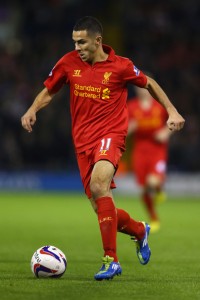 The 26-year-old became Stoke’s fifth signing of the summer, but he is now set to make the move to Dubai to look to reignite his career.

The highlight of the Moroccan’s Premier League career came in December 2013 when his ferocious last-minute strike earned the Potters a dramatic 3-2 win over Chelsea.

Overall, Liverpool have made a £2.35 million profit on the £2.4 million spent on acquiring him two and a half years ago.