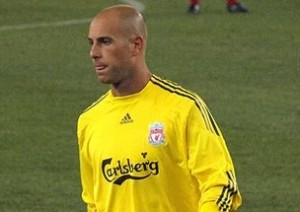 Recently being promoted to captain in the absence of Steven Gerrard and Jamie Carragher Pepe Renia is fast becoming the latest Kop legend. He is well known amongst fans for his outspoken love for the club he has served since 2006, something that can only enhance your reputation. He also seems to have a natural connection with the supporters, often turning around to clap the Kop mid game. He is an instrumental part of the Liverpool team, not only pulling off world class saves at will, but also providing the quick thinking needed to spark rapid counter attacks.

So in many ways, it seems a shame, especially if you as a Liverpool supporter, that such talent does not get to be displayed on an international level, for his national team Spain.

Behind the greats of Casillas and Valdes, Reina barely gets a look in to the Spanish national team. He is made to sit on the bench whilst starting the occasional friendly. Of course, it is totally legitimate to play a regular keeper and few would argue that Casillas is not the best keeper in Spain, and perhaps the world, but it is far too often that the talent in this position gets overlooked. It is also tough when goalkeeper is not a position that regularly gets rotated, as lets be honest, they’re only needed for a few minutes every game.

Another classic example of this ‘injustice’ is Ben Foster. Spending a short time at Manchester United he proved his international potential, before moving from Old Trafford to St Andrews to play for Birmingham City. However, against opposition such as Joe Hart and Robert Green he found it hard to make an impression on the England squad and has since retired from the international scene.

It seems that with such competition for places there will be many goalkeepers going for a single place and inevitably many will miss out. Of course, why do I care? If they don’t start in the first team then they’re quite clearly not good enough.

However I believe, and this could be just the unique example of Spain’s strength and depth of squad, that Reina is extremely unlucky to not be representing his country at an international tournament level. He is obviously extremely talented, and in seeing him playing against England on Saturday I really did feel for him. He is the man who is the support act for Spain’s other two top class goalkeepers, and I’m sure that the love he has for his club is surely a result of the shear bad luck he has endured as a result of his country. A world cup final winner without even kicking a ball, he is perhaps the best example of the talented going to waste.