The highly-rated midfielder is wanted by Arsene Wenger, as he feels that could be the Gunners long-term holding defensive midfielder. And his agent Cezary Kucharski has confirmed a deal is very close.“We are speaking and hopefully we will find a solution.” hesaid.

Now, it is expected that the deal will be finalized up in the coming days, with £2.5million the fee reported to be demanded by Legia Warsaw for the newly turned 17-year old defensive midfielder.

Krystian Bielik, who has been dubbed as the new Patrick Vieira has caught the eye with some impressive displays this season for Legia Warsaw in the Polish League which has lead to interest from Arsene Wenger over a potential move to the Emirates. 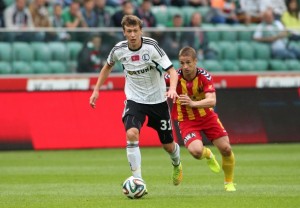 He was reported to have agreed a deal with Arsenal several weeks ago. This much he confirmed when he said last week “I’ve made a decision and I’m not going to change it”

Bielik, who has already made seven appearances for the Polish club this season, despite turning 17 a few days ago, spent time at Arsenal’s London Colney training ground in November and is desperate to make a permanent move to the Emirates.