According to the reports in yesterday evening that Philippe Coutinho is set to extend his stay at Anfield, with a new contract close to being agreed.

The reports that the young Brazilian is in the final stages of securing a new four-and-a-half year deal with Reds. Liverpool gaffer Brendan Rodgers sees the Brazilian as an integral part of his squad, and someone who has the ability to drive the club forward in years to come.

The 22-year-old has been in eye-catching form of late, producing some outstanding individual performances full of creativity, skill and hard work. 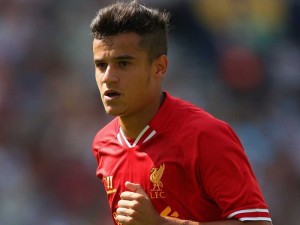 Brendon Rodgers was full of praise for him in his pre-Bolton press conference on Thursday, outlining why the attacking midfielder’s performances have improved after a sticky start to the campaign.

“He was outstanding the other night (against Chelsea). It was a difficult start to the season for him because if you think of Phil Coutinho, he has that bit of magic to make the key pass in the final third and combines with people ahead of him so well.” said Rodgers

“Last year he had a [Luis] Suarez and a [Daniel] Sturridge to make those passes to and he could work well with their style.” he added.

Coutinho joined Liverpool two years ago this month, and has been arguably Rodgers’ most successful signing during his tenure, along with Daniel Sturridge.