Lukas Podolski has completed a move to Inter Milan on loan for the remaining season.

The 29-year-old forward has scored 31 goals in 82 appearances for Arsenal since arriving from Cologne in the summer of 2012.

A World Cup winner with Germany last summer, Podolski became the youngest ever European to reach the 100-cap mark for his country during Euro 2012.

His loan move to Inter Milan was also confirmed by Arsene Wenger.

“He is going to Inter Milan on loan. We got a decent agreement and of course I have so many options up front that he was frustrated will not getting a chance in the team, which you can understand at his age” said Wenger. 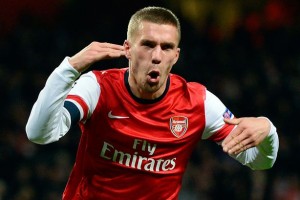 He has scored three goals this season with11 substitute outings for the Gunners. One of his goal include a dramatic last-gasp winner in the Champions League group game at Anderlecht.

Podolski, who was part of the World Cup winning squad in Brazil during the summer, has already linked up with Roberto Mancini’s Serie A side and trained in Milan on Monday.

Inter Milan’s gaffer said at a press conference that the German star is experienced and has a wonderful career behind him. He will help us and is not at the end of his career.