Podolski in Mancini’s transfer list for Inter Milan in January

Inter Milan coach Roberto Mancini has confirmed that Arsenal forward Lukas Podolski is a target and says he is not upset to have missed out on Alessio Cerci.

He said negotiations with Arsenal have not yet started either, although Podolski is one of several players Mancini is currently keen on bringing to Milan.

“Podolski is part of that list and we’ll just have to see who actually arrives” said Mancini.

On other hand, the German star Lukas Podolski has said he is frustrated with his lack of playing time at Arsenal. 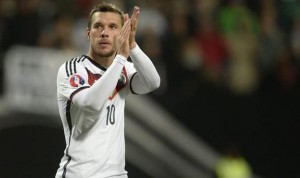 The French midfielder, Diarra is reported to have already passed a medical in Milan and agreed terms with the Nerazzurri but still has a contract with Lokomotiv despite being sacked by the club in the summer. He is said to be awaiting clearance from FIFA to complete the move.

Remember, Inter Milan gaffer, Mancini is looking to strengthen the attack of a side that goes into 2015 in 11th place in Serie A, albeit only six points adrift of third-placed Lazio.

Their first match of 2015 comes at Juventus on Jan. 6 and, as the transfer window in Italy opens only 24 hours earlier, it is unlikely Mancini will have any new faces in place for that game.