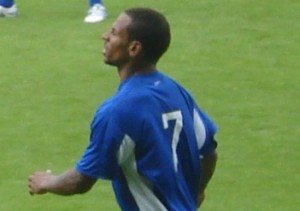 QPR have been dealt a huge blow with the news that summer signing DJ Campbell will miss the next two months with a foot injury Sky Sports reports.

The 29-year-old striker, signed from Blackpool in August, broke his foot in training on Thursday after a scan revealed it was much worse after club medics initially diagnosed a broken metatarsal.

He will now require an operation to correct the bone and Rangers’ head physio Nigel Cox revealed Campbell it will be December before Campbell can think about returning to the fold.

He said: “The consultant we have spoken to has advised us that the best way to deal with it is to put a pin though it,”

“DJ will have surgery and will then be placed in an aircast boot for three weeks which will immobilise the foot.

“The benefit of that is it means there can be some partial weight-bearing so DJ can put weight on the foot from day one.” He added.

“But for an injury of this nature you are looking at a timescale of six-to-eight weeks before the player can resume full training.”

The strikers injury couldn’t have come at worser time for R’s boss Neil Warnock with his current crop of forwards struggling to find the net at Loftus Road.

Jay Bothroyd, Heidar Helguson, Jamie Mackie and Campbell have two goals between them and the latters injury may prompt Warnock to dip his toes back into the transfer market in January.