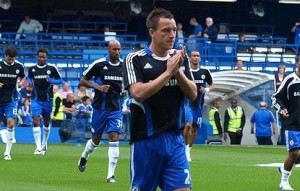 Following John Terry’s alleged racist slur towards QPR defender Anton Ferdinand during Sunday’s match at Loftus Road, and French international Patrice Evra’s claims that he was racially abused by Liverpool front man Luiz Suarez in the Liverpool vs Manchester United game two weeks ago, the debate over racism in football is inevitably going to resurface as it rears its ugly head once again. The only surprising thing about both reported incidents is that it has taken place between rival professionals. Not that it’s acceptable, but in a world where racism hides in the shadows of football stadiums across the world, we are usually accustomed to hearing the chants come from the crowd and not the on the pitch between two players. Either way it is still taking place, despite widespread global campaigns such as “Kick it Out” employed to eliminate the problem.

Nowadays in football there isn’t a week that passes without some controversy, last week we were talking about Rooney’s red card and whether he should be on the plane to the European Championships, the week before Carlos Tevez refusal to play for Manchester City against Bayern Munich in the Champions League was hot in the headlines and now whether or not Chelsea and England captain “JT” has committed an act of racially motivated abuse, the ultimate football sin in some eyes, which quite rightly has no place in football or any walk of life for that matter. There should be a zero tolerance policy on racism in football and those found to be guilty should and will be punished appropriately.

If the claims are true you can be sure the English media will do its best to derail the Chelsea captain and rightly so, but in a season where England head off to the European Championships who knows what effect it could have on England’s preparations for the tournament. That said an England team at a World Cup or European competition in any sport always seems to have controversy following close behind.

But to those waiting to burn Terry and Suarez at the stake from the outset, with the former likely to come out worst, ponder for a moment, the old saying innocent until proved guilty springs to mind. After all having won back the England captaincy earlier this year after investigations into his private life and affair with Wayne Bridge’s girlfriend, “Mr Chelsea” would be stupid to step out of line again, wouldn’t he?

Nevertheless acts of stupidity are so synonymous with footballers nowadays that what when we read and hear about the them in the aftermath of a weekend of premier league football on a Monday morning, why are we surprised that it happens in the first place?

Agreeably it must be said that Racism isn’t an act of stupidity, but more a cheap shot by individuals who choose to use it to derail opponents, but with cameras everywhere people don’t stand for it anymore and rightly so. Football should unite, not divide.