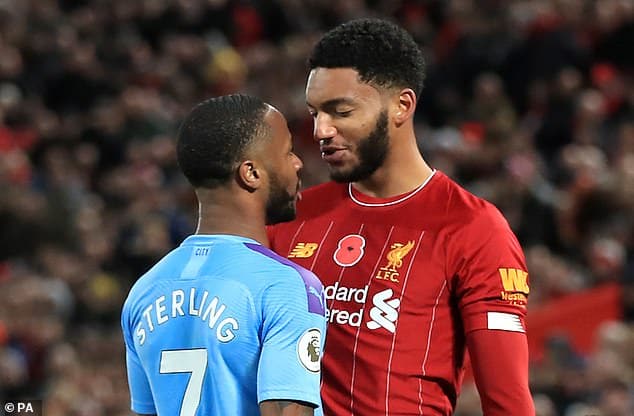 England star Raheem Sterling has been dropped for Thursday night’s match against Montenegro after the FA confirmed there had been a ‘disturbance in a private team area’ with his national team-mate Joe Gomez.

The duo shared a heated exchange towards the end of Sunday’s crunch Premier League match at Anfield between Gomez’s Liverpool and Sterling’s Manchester City, and it appears tempers flared over into the following day at St George’s Park.

“We have taken the decision to not consider Raheem for the match against Montenegro on Thursday,” Southgate said.

“One of the great challenges and strengths for us is that we’ve been able to separate club rivalries from the national team.

“Unfortunately, the emotions of yesterday’s game were still raw.”

Matt Hughes and Sami Mokbel, who originally broke the story on Monday evening on Mail Online, reported the incident in further detail:

‘Sterling was sat down in the canteen when Gomez arrived and leant over from behind to shake his hand, leading to him to attempt to grab his team-mate by the neck.

‘The rest of the England players initially thought Sterling was joking, but it soon became clear that he had lost control and the pair were separated.’

Paul Joyce, the Northern Football Correspondent for The Times, tweeted this morning that ‘Joe Gomez has a scratch by right eye as a result of Raheem Sterling incident.’

‘First and foremost everyone knows what that game means to me! Everyone knows I am not that way inclined and more to the point. [sic] Both Joe and I have figured things out and moved on.

‘We are in a sport where emotions run high and I am man enough to admit when emotions get the better of me.’

Sky Sports, meanwhile, reported that Gomez ‘pleaded’ with Southgate for Sterling not to be sent home.

Clearly, Southgate decided that being dropped for Thursday night’s match was sufficient punishment; it appears likely, then, that Sterling will be back in contention for Sunday’s tougher trip to Kosovo.