The Reds man appeared to strike out at Swansea’s Federico Fernandez on Monday night 4 – 1 win at Anfield.

Sterling will face no charge from the FA despite raising his hands in a clash with Fernandez. The Liverpool forward reacted to Fernandez as the pair tussled for the ball in the second-half of Monday’s game at Anfield.

Television replays appeared to show Sterling catching the Swans’ defender with his hand but the FA have decided no further action needs to be taken against the 20-  year – old with referee Andre Marriner and his assistants said to have seen the incident. 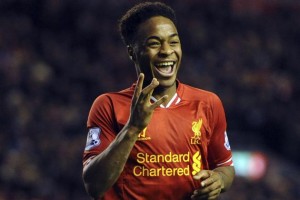 While Jonjo Shelvey, however, has been hit with a charge by the governing body after he appeared to swing an elbow into the face of the Reds Emre Can.

The former Liverpool midfielder has been charged with violent conduct and has until 6pm on Wednesday to respond. In response, Shelvey took to Twitter to protest his innocence, saying the clash was not intentional.

Remember, Iffound guilty, he could be banned for four matches having already been sent off this season in a game with Everton.