Arsenal’s Aaron Ramsey has not recovered from a hamstring injury and will miss Thursday’s Premier League match against Southampton.

the Wales international will not be fit enough for the Gunners’ first game of 2015 after failing to return from the problem picked up against Galatasaray in the Champions League.

While it was originally diagnosed as a minor injury and his projected return was January 1st.

Arsene Wenger had hoped that Ramsey might have recovered from the hamstring injury he sustained by the time of Thursday’s game but it is understood that he will not be ready to start. 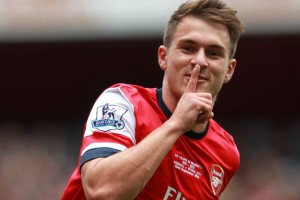 On other side, Tomas Rosicky is expected to be back in the first-team fold when Arsenal take on the high-flying Saints in Thursday’s south coast encounte.

Remember, Mikel Arteta and Jack Wilshere both also currently injured, which leaves Wenger again with the option of pairing Mathieu Flamini and Francis Coquelin in central midfield or asking Rosicky, Alex Oxlade-Chamberlain or Santi Cazorla to play in a more central position.

His attacking options are also limited by the suspension to Olivier Giroud following his red card against Queens Park Rangers but Theo Walcott is now close to match fitness. Mesut Ozil will also return to full training shortly.