According to the report, Athletic Bilbao have agreed a fee with Spanish giants Real Madrid for the transfer of Asier Illarramendi.

Athletic Bilbao have tabled an offer of €25 million for Illarramendi, but the midfielder wants to stay at the the Santiago Bernabeu to fight for his place until the end of the season. 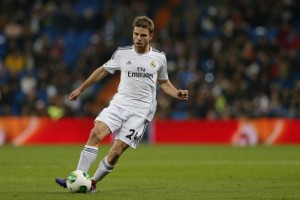 The Spaniard Isco’s strong form in recent months and the summer arrivals of James Rodriguez and Toni Kroos have meant the former Real Sociedad man, who signed for the club in the summer of 2013 on a six-year deal, has struggled for game time.

The Gunners have been heavily linked with a move for the central midfielder, as reported by the Mirror, but it seems that the move could be off with Illarramendi either staying at the Bernabeu to fight for his place or instead moving to Bilbao.

The Real Madrid gaffer Carlos Ancelloti severely bolstered his squad in the summer and it seems Illarramendi’s future could be elsewhere as Bilbao step up the interest.