According to reports, Liverpool have bid for Fiorentina goalkeeper Neto, as they look to improve their options between the sticks. The report also claims that the goalkeeper is Liverpool’s top transfer target this January.

The Brazilian shot-stopper has been a regular for the Serie A side this season, keeping seven clean sheets in the league and earning himself plenty of admirers.

Fiorentina are closing in on Napoli’s Antonio Rosati, opening the way for Neto to leave the club and Liverpool are determined to bring him to the Premier League.

Liverpool gaffer, Brendan Rodgers appears to have lost faith in Simon Mignolet, opting to use Brad Jones in goal at points this season, but neither are seen as the solution to their problems behind the defence. 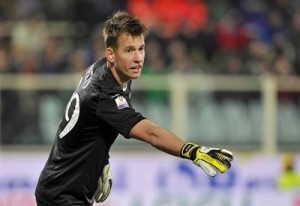 The Brazilian Neto’s impressive displays in Serie A have alerted the Reds to him and he is the subject of a £2 million bid from the Premier League side, as they hope to prise him away this month.

Meanwhile, Juventus are also hoping to sign the 25-year-old goalkeeper and are willing to trade speedy forward Sebastian Giovinco for the Brazilian, but it remains to be seen whether Fiorentina would prefer the player or a fee for Neto.