The Reds miss out on La Liga Wonderkid Paco Alcacer

The Premier League side  Liverpool along with  Chelsea have missed out on the possibility of signing Valencia’s Paco Alcacer after he signed a new new five-year deal, according to the reports.

Paco Alcacer was also being tracked by Arsenal, but all moves will now be off after the striker confirmed he will be staying in La Liga, despite being heavily linked with a possible exit.

The 21-year-old released a stateme 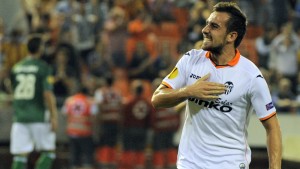 nt via Valencia’s official website, highlighting his decision to remain in the La Liga to help Los Che progress: “I am delighted and proud to be continuing at Valencia CF for five more seasons.

“I want to thank the club for the confidence in me that they are showing. What I have to do now is pay them back by scoring goals and giving everything that I have to help the team.”

Liverpool were believed to be planning a bid in the region of £15million to lure him to England after the Spain international’s impressive start to the current campaign.