The Reds must resist temptation to sell Lucas Leiva in January

Liverpool gaffer Brendan Rodgers has a big decision to make in January that whether he want to sell Lucas Leiva to Inter Milan or not.

Italian club, Inter Milan are looking to do some smart business in January, having already signed Lukas Podolski on loan from Arsenal.

Speculations are rife about Lucas’ future after it was reported that Inter are planning to lodge a bid for Lucas within next few days, according to media reports.

As, Inter Milan are ready to step up their pursuit of Lucas Leiva and leave Liverpool manager Brendan Rodgers with a big decision. 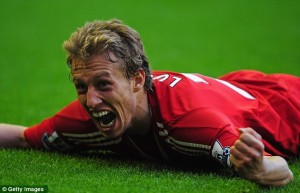 Roberto Mancini is a firm admirer of the Brazil midfielder and has made clear his ambition to take the 28-year-old to the San Siro during this transfer window to help Inter’s pursuit of a Champions League place. The Italian club are expected to make a bid in the next 24 hours.

Meanwhile, Lucas has complicated the matter, when he add fuel to the fire by posting a cryptic goodbye message on Twitter.

Liverpool boss Brendan Rodgers, the Reds manager, claimed prior to Sunderland game that Lucas could be on his out of the club but certainly Liverpool would not entertain any loan bid for the Brazilian midfielder.