Odegaard has spent the last couple of months touring around Europe to visit the training facilities of a host of clubs, including Real, Liverpool, Barcelona, Ajax, Bayern Munich, Manchester United and Manchester City.

But the 16 years-old Norway international has decided to sign for Carlo Ancelotti’s side, subject to a medical which is due to be completed this afternoon. 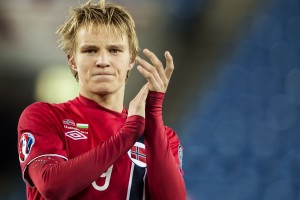 “Real Madrid CF and Stromsgodset have reached an agreement for the transfer of the player Martin Odegaard.” a Real Madrid statement confirmed.

“After undergoing the relevant medical examination, the player will serve the media, accompanied by the Director of Institutional Relations, Emilio Butragueño, today 22 January at 13:30 in the press room of Real Madrid club” he added.

The Norwegian has been playing in the first-team of Norwegian side Stromsgodset and embarked on his mission to find his next club when their season ended in November.

The Anfield appeared to be the most keen of Odegaard’s Premier League suitors. He training with their first-team squad at Melwood, before being taken out for dinner with Philippe Coutinho, his favourite Liverpool player.