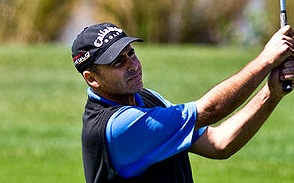 United States PGA golfer Rocco Mediate insists that Tiger Woods will rediscover his best form and that he will become even better than he was prior to the disruptions caused regarding his private life.

Woods’ exposure, coupled with the injury that the golfer suffered in 2008, has not been anywhere near the golfer he once was, failing to win any major competition apart from a win in the Melbourne Masters in 2009. Mediate believes that Woods is suffering with regards to his physical motion and feels that once Tiger Woods get his rhythm and timing of the swing right he will be once again winning all the majors as he had done previously.

“It’s the physical motion that’s causing the problem, period,” Mediate stated. “If he gets his golf swing back, the ball game is over. Trust me. He knows that once he figures out where his ball is going, it’s over. He’s already proved it 71 times, in 14 majors. I think he can be better than he was before.”

Mediate also suggested that he is far happier with Woods playing, claiming it gives himself an opportunity to beat the best golfer in the world despite Woods not having the number one status he practically owned all those years.

Tiger Woods will make his next appearance at the Frys.com Open in California which will he first attempt at the competition.