Rodgers accept mistakes that help Leicester to bounce back at Anfield.

Liverpool gaffer, Brendan Rodgers accepted that mistakes cost his side dearly after Leicester City battled from two goals behind to claim a 2-2 draw in the Premier League at Anfield yesterday.

The Reds had advantage in first half with a pair of penalties from the former England Captain,  Steven Gerrard. He converted both which had earned a healthy advantage heading into half-time as they sought a third straight win.

But a troublesome period after the interval saw Nigel Pearson’s Leicester register successive long-range efforts through substitute David Nugent and Jeffrey Schlupp to secure a point. 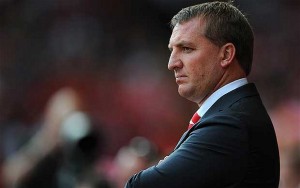 Rodgers explained why his side’s display had not been of the required standard and pointed to the manner in which goals were conceded.

“We probably got what we deserved in the end. I don’t think we played well, in all honesty, and I thought Leicester played very well” said Rodgers in a honest post-match assessment after the match.

Rodgers accepted that they could not serve up a similar kind of showing against Leicester, which they had against in last two matches. He felt his team were guilty of making too many errors and thus unable to recreate the energetic efforts they have generated in recent weeks.