Liverpool gaffer, Brendan Rodgers said the FA Cup final would be a “wonderful send-off” for Steven Gerrard after his side beat AFC Wimbledon 2-1 to reach the fourth round.

The captain scored twice in his first game since announcing he would move to Major League Soccer in the summer.

If Liverpool will reach the final, which is on Gerrard’s 35th birthday on 30 May, it would be his last game in England.

“There would be no better way for it to end. Steven was outstanding. He gave a brilliant individual performance. He scored two and if he was a more selfish player he might have had a hat-trick.”said Rodgers. 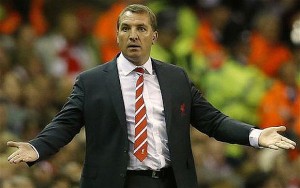 Midfielder Gerrard, who was expected to be on the bench, started the game and took his tally to 182 goals in 696 appearances for Liverpool, the only club he has played for in Premier League.

Rodgers added that Gerrard is a world-class player who might be getting older, and at times the legs fatigue a bit, but he’s absolute top drawer, a top-class player.

Steven Gerrard has played in three FA Cup finals for Liverpool, winning in 2001 against Arsenal, 2006 against West Hamand losing in 2012 (to Chelsea). He famously scored a long-range equaliser in the last minute of the 2006 final and also scored a penalty in the shootout.