Brendan Rodgers felt Adam Lallana’s unlikely first goal of a double in the encouraging 4-1 victory over Swansea City tonight encapsulated the kind of intense pressing that carried his team to three points.

The Englishman chased down Swansea goalkeeper Lukasz Fabianski early in the second half and turned a seemingly futile cause into a healthier advantage when the subsequent clearance clattered off him and into the Kop end net.

Rodgers added that it was a big move for him coming here from Southampton, where he was the captain. For all of the players coming in it is difficult. When you come into a club this size with the expectancy, you never know it until you arrive here. 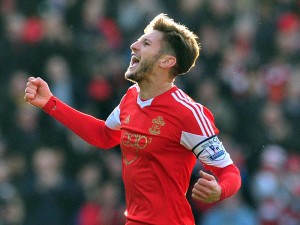 The Reds were dominant for the majority of the Premier League encounter at Anfield, moving their visitors from side to side, forward and backward to fashion the space in which to flex their scoring muscles.

The 3-4-3 formation that has helped their manager brendon Rodgers to rekindle their form during recent weeks blossomed further throughout a bitterly cold evening on Merseyside, with supporters in attendance warmed by Alberto Moreno’s opener.

“That was what was missing from our way of working for the first period of this season. We’re a team that plays with big pressure on the opponents” said Rodgers after the final whistle yesterday.