Roma have become the latest club to enter talks with Chelsea over the signing of Mohamed Salah.

Chelsea are prepared to listen to offers for the Egypt international, who joined from Basle for £11million 12 months ago.

Roma has initiated the contacts with the player’s agent. As, Chelsea would like to sell him on loan with forced option to buy, while Roma prefers a loan with option to buy set at 15 million euro but not a forced one. 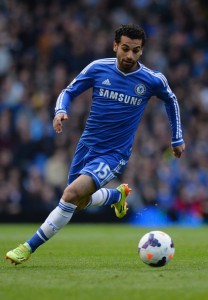 Besiktas president Fikret Orman said yesterday that his club had begun negotiations, while Inter Milan have also expressed an interest. A number of Premier League clubs, including QPR, Sunderland and Stoke, have been linked with a loan deal.

Salah has started just three games this season and played only 30 minutes in the Premier League. It is believed the 22-year-old winger has grown frustrated about his lack of playing time and wants to move away from Stamford Bridge.

Manager Jose Mourinho moaned earlier in the campaign that Salah was not doing enough to warrant more games, although he also claimed the player was not for sale.

However, it is understood Chelsea are ready to let him go if they receive a high enough bid.