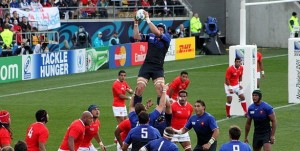 The weekend previous would certainly have been one for television in bed; with the cold weather of Autumn creeping in, the thicker duvet out, and a nice warm cup of tea ready to get stuck into the quarter finals of the Rugby World Cup 2011. This year saw juicy encounters between Six nations rivals France and England, Wales and Ireland, whereas the other half were the future Four nations grapples of Australia and South Africa, New Zealand and Argentina… And what a weekend it was.

With news of Daniel Carter’s departure from the World Cup, New Zealand brows would have been particularly furrowed especially after the premature removal of Colin Slade early in the match with Argentina. Worries would have been even more severe due to the valiant start of Argentina leaving the half time score at 12-7 in New Zealand’s favour. The All Blacks fought back as the Pumas ran out of steam towards the end of the Second half, but Head Coach Graham Henry will surely have some questions to answer regarding the position of Fly-half.

The gripping encounter between Australia and South Africa left the Wallabies on top to face the All Blacks in the Semi final. However this victory was not always so assured. With the South Africans coming into the match seemingly as favourites in excellent form, Australia certainly had to dig deep with one try from Horwill and penalties from O’Connor cancelling out the two scores from Steyn from the tee, and one drop goal making the final score 11-9. The winners of the Tri-Nations set to face the arguable favourites for the World Cup in New Zealand on the 16th October to book a place in the final.

Having been an England supporter at the weekend, it was not so joyful for me as they were brought down to earth by a rejuvenated France, losing 19-12. Admittedly, England’s performance in the first half was far from pleasing, but the French certainly came out with vengeance in mind from the Six Nations. England fought back with a try from Cueto late in the second half, however it seemed too little, too late as France, through a late drop goal from Trinh-Duc, put England out of sight.

It seems the current dark horse of the competition are Wales. Yet they are quickly becoming a force to be reckoned with. Having come second in their group behind South Africa, Wales stunned Irish supporters by dominating their home nation rivals 22-10. Wales have not reached the World Cup semi-finals since 1987, yet having crushed the Irish in Wellington on Saturday, no-one can be in any doubt that this year, they thoroughly deserve it.

The Semi Finals are as it stands: France will take on Wales in a titanic, Northern hemisphere, Six Nations clash; whilst New Zealand showdown with their old foes Australia. It seems the best of the Six Nations are set to face the best of the Tri Nations in the World Cup Final. The best that the north has to offer, and the best that the men down under have to offer. All we can do now is sit back and enjoy the spectacle.