The West Ham gaffer fears Liverpool striker Daniel Sturridge could return to action to face his West Ham side on coming weekend.

Sturridge has not featured for the Reds since August 31 after he initially strained a thigh on international duty with England. The English International on the eve of his comeback he pulled a calf muscle in training and just when he appeared to have got over that he sustained another, different, thigh injury. 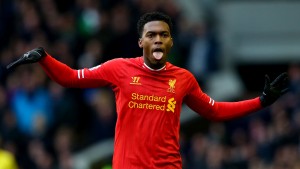 The 25-year-old was expected to play a part in the League Cup semi-final second leg tie against Chelsea on Tuesday night, but failed to make the bench.

And now when he completed his rehabilitation, the Hammers boss expects to see Sturridge play a part in Saturday’s clash at Anfield, but believes his in-form Hammers are up for the challenge.

“I believe Sturridge will probably be back against us at some stage.”  said Sam Allardyce “I think they (Liverpool) are in the best form at this moment in time for the entire season,” he added.

Allardyce said that he think the way Anfield side playing is right up there with where they were last year. They obviously don’t have the same goal threat they had last year, in Sturridge and Suarez.