The Chilean International, Alexis Sanchez will not be risked against Aston Villa on Sunday, manager Arsene Wenger has confirmed.

The former Barcelona player has featured in all but one of Arsenal’s matches this season but he has struggling with a slight hamstring problem, and Wenger has decided to give him a break.

After Theo Walcott and Mesut Ozil returned to the starting team against Brighton last weekend and one, if not both, are likely to be included against Aston Villa.

While  when asked ab 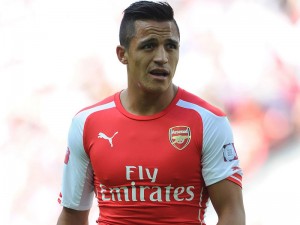 “We’ll test that tomorrow. It’s unlikely that I will risk him on Sunday but we’ll see.”

In the meantime, new signing Gabriel Paulista is in line to make his debut for the club. The Brazilian  completed his move from Villarreal earlier this week and Wenger is excited at the prospect of working with the Brazilian.

“He’s ready to go. He’ll be in the squad, certainly. He started his training yesterday and looks fit,” Wenger told reporters.” said Wenger

“I saw great quality. His level of concentration, he’s quick, has great commitment and he’s young. We are in a job where competition exists. The best player of the moment plays.” he added.