Santi Cazorla want to play in a center midfield

The Gunner’s Santi Cazorla has revealed that he prefers to play in a central role in the Arsenal midfield.

The 30-year-old was in particularly impressive form last month as the former Malaga playmaker scored a commendable four Premier League goals. He has also created 47 chances for team-mates this season, believes he is at his most dangerous in the centre of midfield, dictating Arsenal’s play.

“I always try to make goals,” said Cazorla “It’s important for me because I am a midfielder and I always want to help the team score, and I will try to make more before the end of the season.” he added. 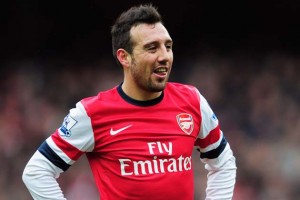 The Spaniard said he has more space in the middle, which results into more possibilities to score and assist, and he like this position very much. Cazorla added that he always can help the team and he love when play in the middle.

The former Malaga player has scored five goals and has made four assists in 25 appearances in all competitions this season. So far, he helped his gaffer Arsene Wenger, as being back up to some key players which suffered injuries during the first phase of the season.