Home » Football » Chelsea » Schweinsteiger under no pressure to extend deal

Schweinsteiger under no pressure to extend deal

The German star Bastian Schweinsteiger says he feels no pressure to commit his long-term future to Bayern Munich despite only having 18 months to run on his contract.

Schweinsteiger’s deal at the Allianz Arena expires at the end of next season, but he does not see the need to enter into talks just yet. 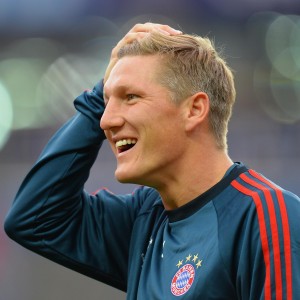 The 30 year-old midfielder has previously been linked with moves away from Bayern, with the likes of Manchester United and Chelsea reportedly interested in his signature.

“I have no pressure, I know what Bayern Munich means to me and Bayern Munich also knows what they have in me. We know each other very well.” said Schweinsteiger when asked about extending his contract

“I feel very good again and I have gathered a lot of experience. I can imagine to play three or four years at the highest level.” He added.

However, Schweinsteiger who only made eight appearances in the first half of the season due to a troublesome knee injury does hope that head coach Pep Guardiola signs fresh terms.

He added: “There are not so many coaches [like him] in the world, and the people responsible for Bayern know that.

Schweinsteiger was one of the key players in German lineup as he played brilliantly throughout his side’s World Cup win in Brazil 2014.