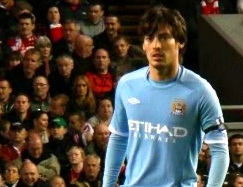 Manchester City’s outstanding performance at Old Trafford on Sunday blew the title race wide open as they opened up a 5 point lead at the top of the table. What it did more than anything was outline City’s intention to steal the title away from under the noses of their noisy neighbours.

To go to the Theatre of Dreams and end Manchester United’s 37 game unbeaten run at home and with it put an end to a run of 19 successive home wins in the premier league takes some doing.

If the rest of the premier league were not aware of the potential Manchester City offered before the result on sunday, they certainly are aware of them now. The ease at which city carved opened united is not surprising when you consider the devastating form they have shown in front of goal this season. Although Sir Alex was left shocked and disappointed with the result, he has been around long enough to make sure his side responds quickly to the defeat.

One of the reasons for Manchester City’s electrifying start to the season, is the form of midfield magician David Silva. Silva who experienced a slow start to life at the Etihad stadium has started the season in the same manner that he finished 2010/11 rediscovering his best form, the form that saw him rise through the ranks at the Mestalla, the form that has seen him transform himself into one of the most feared wingers in Europe and in the premier league.

At Old Trafford Silva was the shining light, with a number of majestic touches on the ball and his awareness and vision was second to none in a long line of players who caught the eye for Mancini’s men on Sunday, as they humiliated their closest rivals in their own back yard.

Silva was the architect, playing an instrumental role in two of city’s goals, achieving a 92% pass completion rate and getting on the score sheet to compound United’s derby misery. His pass to set up Edin Dzeko’s sixth and final goal symbolized the scintillating start Silva has had to life in the league this season, scoring 3 goals, providing 6 assists and notching up an impressive 27 shots on target.

A player so talented that he isn’t an automatic choice for the Spanish national team, frightening, not only on a domestic level for the rest of the premier league but also on an international platform as well, ahead of the Euro 2012 draw in early December. It doesn’t bode well for the rest of Europe does it?

You wouldn’t be far wrong in saying that Silva has been the catalyst to everything good about free scoring city and it is no surprise that they remain unbeaten in the league this campaign. Aguero, Dzeko, Balotelli, Nasri and Silva working together in perfect harmony to compliment city’s rock solid defence.

Indeed in the wake of the demolition job at Old Trafford a lot of praise has been thrown at the feet of city’s mean defence, led imperiously by colossal captain Vincent Company and rightly so, the leagues second meanest defence behind surprise package Newcastle have only let in 7 goals so far this season, barely putting a foot wrong in the opening 9 games.

With plenty of twists and turns inevitable as the season draws closer to the halfway mark, you can be sure more points will be dropped along the way. As optimistic as city fans want to be after the result at Old Trafford, the win proved to the rest of the chasing pack on Sunday afternoon that they are real contenders for the title this season if they can keep there best players fit, most notably Spaniard Silva.

That said the “blue moon” faithful would be naïve to think that the title will be heading to the Etihad without a fight from United and the rest of the chasing pack for that matter.