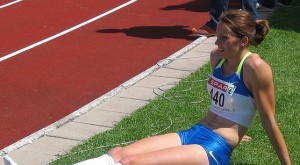 Kelly Sotherton is set to make a remarkable return to heptathlon and the former Olympic bronze medal winner is eyeing up a place in next years London Olympics.

The 34-year-old athlete came third in the 2004 games in Athens but has concentrated on the 400 metre hurdles since November 2010 but failed to qualify for the World Championships.

She has started training for multi-eventing again after losing her lottery funding and has admitted she has rekindled her love for the sport.

Sotherton said: “I am motivated more and I’m enjoying the fact I could be at the Olympics in the heptathlon,”

“It has rejuvenated my feelings for the sport.”

She later posted on her official twitter account that she had to keep quiet about her comeback and that she was relieved she could finally tell people the news.

“I’ve had to keep my gob shut for over 2 months about this! So it’s a relief it’s out! #heptathlon” She said.

Despite her past successes Sotherton has been overtaken as British number one by Jessica Ennis and doesn’t expect to challenge the 25-year-old admitting a gold medal is beyond her limits.

“I don’t think I’m going to be rivalling her as I possibly could have been a few years ago. I know where my limits lie, I’m not striving for a gold medal,”