According to the reports, La Liga side Getafe want to sign Arsenal youngster Hector Bellerin on a short-term loan deal, but the Gunners are unlikely to allow it considering the injuries in the squad. 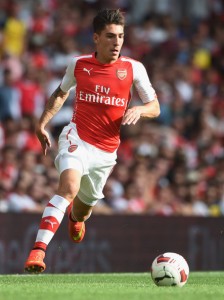 Bellerin, 19, has stunned a lot of people at Arsenal this season after making his Premier League and Champions League debut, picking up 10 appearances in all competitions this season.

The young Spanish full-back has had his chance to shine in Arsene Wenger’s side due to injuries to Calum Chambers and Mathieu Debuchy, who is now out for several weeks after dislocating his shoulder against Stoke City last weekend.

Arsenal poached Bellerin from Barcelona’s famous academy in 2011 and Arsene Wenger handed him his debut in the Capital One Cup last season, but that was the only time Arsenal fans got a glimpse of the future star.

Now, after a decent run in the side this season, Spanish side Getafe are reportedly looking him on a short-term loan deal until the end of the season. However, it would seem unlikely that Arsenal would let him leave considering the already short lack of options in defence for Wenger.