The Blues have entered into talks with Fiorentina over the purchase of Juan Cuadrado as the Premier League leaders prepare for the possible departure of Mohamed Salah or André Schürrle this month.

The Portuguese had entered the January window anticipating no major business, having declared his satisfaction with a squad who have lost only twice in all competitions this season and remain in the hunt for silverware on four fronts. 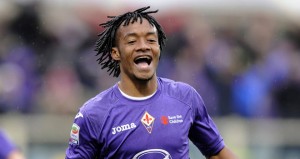 But Chelsea have sanctioned a number of loan moves for fringe players away from the club, interest has emerged in Schürrle and Salah, two of their senior squad players, which could see either leave before the deadline on 2 February.

Now, Chelsea had hoped to add a right-sided forward of established talent next summer and had made known to Fiorentina their interest in Cuadrado, one of the key players in Colombia’s fine 2014 World Cup campaign but whose form has been patchy in Serie A since.

They have moved in the past 48 hours to sound out Fiorentina over the possibility of bringing the deal forward by six months in the acceptance that a sale of Salah or Schürrle would necessitate the immediate purchase of a replacement.

The talks between Chelsea and Fiorentina have quickly established with Cuadrado’s £26.8m buy-out clause would have to be triggered if a deal is to be concluded.