Liverpool take their seven-game unbeaten run to Aston Villa with the pressure starting to mount on Villa boss Paul Lambert.

AstonVilla gaffer, Lambert will be hoping the arrival of Spain Under-21 international Carles Gil will boost an attack that has scored just seven goals in 10 home Premier League games this season.

Liverpool have not tasted a defeat in all competitions since losing 3-0 at Manchester United just over a month ago.

They travel to Villa Park on the back of a relatively comfortable victory over Sunderland, where Lazar Markovic starred and scored in a 1-0 victory – it was their fifth win in the last seven games. 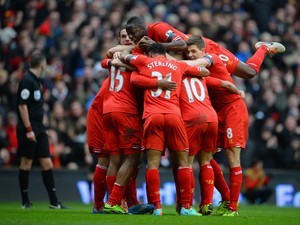 Raheem Sterling is back in the Liverpool squad after a week off. Liverpool captain Steven Gerrard and fellow midfielder Adam Lallana have a chance of playing some part at Villa Park.

Gerrard was withdrawn at half-time of last Saturday’s win at Sunderland with a tight hamstring, while Lallana is ahead of schedule in his return from a thigh injury sustained on New Year’s Day.

As, Mario Balotelli has scored four goals in three Premier League games against the Villans, twice as many goals as he has against any other opponent. So he has a chance to prove his worth today. While, Liverpool manager Brendan Rodgers says he is determined to help Mario Balotelli succeed at the club.