The Hull gaffer, Steve Bruce has confirmed that his is interested in signing Yaya Sanogo on loan from Arsenal.

As, the Gunners boss Arsene Wenger wants the French striker to join a Premier League team on a short-term deal to gain experience.

Hull gaffer, Bruce is thin on options up front after losing Sone Aluko to a calf injury, leaving him with Nikica Jelavic, Abel Hernandez and Yannick Sagbo as fit strikers. Now he admits he is monitoring Sanogo’s situation.

“It’s been made clear that the boy might be available on loan and it’s something we’ll have a look at.” he said.

The promising young forward has not managed to find many first-team opportunities this season due to some high quality competition for places upfront at the Emirates Stadium. 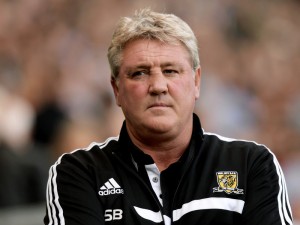 The Frenchman has scored just one goal from six appearances this season and recently reports had linked him with a loan return to Ligue 1.

However, Wenger has insisted the 21-year-old change his mind at that time. According to French media reports, Wenger wants Sanogo to go on loan to a Premier League club so he can master the intensity of English football