It appears to be as Gerrard knows the right way to say goodbye. Gerrard scored twice in Liverpool’s 2-1 win over Wimbledon in the third round of the FA Cup on Monday at Kingsmeadow.

The former England Captain struck just three days after the 34-year-old midfielder announced that the 2014-15 season would be his last as a Liverpool player. Gerrard admittedly has been emotional since Friday, but he was his usual influential self when he stepped on the field.

Gerrard gave Liverpool an early lead when he started and finished a move in the 12th minute. He initially passed to Javier Manquillo, continued running toward Wimbledon’s goal and headed the Spanish fullback’s cross past goalkeeper James Shea. 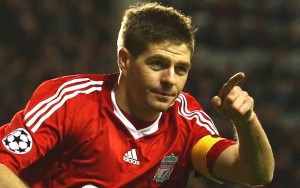 However, Liverpool giant beat Shea with a perfectly struck free kick from 25 yards out. At the end his superb strike would stand as the game-winning goal.

Gerrard is unlikely to do so, but it never hurts when he makes Liverpool fans dream of what else he has in store for the final five months of his legendary Anfield career.