Steven Gerrard says Jordan Henderson is the perfect choice to take over as Liverpool captain. The Englishman will leave the Reds for MLS side LA Galaxy at the end of the season.

The 24 years-old is favorite to inherit the Anfield armband and Gerrard believes his fellow midfielder has what it takes to make the step up.

“Jordan has everything you need to be a great captain. He’s a fantastic professional who tries to lead by example in every training session and in every game.” said Gerrard.

The former England Captain believes that Jordon can become a great captain for this club.He said the former Sunderland is fantastic player for me to hand the armband over to. 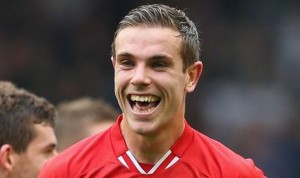 As, Henderson struggled for form in his first season after joining from Sunderland for £16m in 2011. But his captain praised his team-mate for toughing it out.

“It was a big move at a young age. He knuckled down and worked even harder. He’s a true professional and a very strong character.” said Liverpool Captain.

Gerrard, who will end his 25-year career with Liverpool when moves to the US in the summer.He will sign an 18-month deal worth about £6m with LA Galaxy, the MLS Cup winners.