After returned to full training last week the England international is in line to be included in Brendan Rodgers match day squad as they travel to Stamford Bridge to fight for a spot at Wembley in March.

The England International has not played for Liverpool since August after months of frustrating setbacks hampered his return for the rest of 2014. 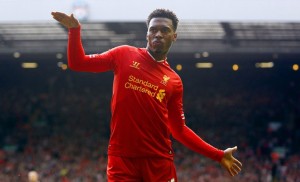 Though, having successfully re-joined first team training it is now only a matter of time before he pulls on the red jersey – and could well do so against former club Chelsea at Stamford Bridge.

“He had his training session with the team yesterday, he trained very well. Said Brendon Rodgers. “That was as comfortable as he has looked. I thought he looked back to normal. ‘We will see how he feels today, but if he is not ready for tomorrow we won’t risk it.” he added.

The Anfield sidel have whole heartedly missed the form and goals of Sturridge this season with Mario Balotelli, Fabio Borini and Rickie Lambert only notching three league goals between them.  The former Chelsea striker scored 24 in all competitions last season.