Sturridge and Sterling key to lift-off for Liverpool, says Rodgers

Liverpool manager Brendan Rodgers is convinced the return of Raheem Sterling and Daniel Sturridge will give his side lift-off as they look to push for a European place in the second half of the Premier League season.

Sterling missed Liverpool’s 1-0 win at Sunderland on Saturday after being rewarded for his tireless contribution over the Christmas period with a two-week break in the Caribbean.

But Rodgers believes the 20-year-old’s scheduled comeback against Aston Villa next weekend will coincide with the start of a run-in which will end frustration over the Reds’ relatively inconsistent start to the campaign.

“I felt if we are going to get the best out of Raheem he is going to need a little bit of a rest.” said Rodgers. 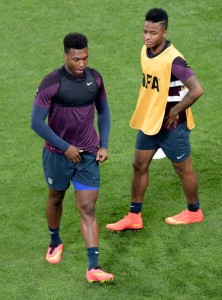 “We will get Raheem back fresh and (Daniel) Sturridge back fresh and we also have Adam Lallana to come back – so it is going the way I hoped it would” he added.

On other side, Daniel sturridge is back after rehabilitation and he will probably play for the Reds in later half of this month.

Rodgers said the exciting thing is that his side have always been better in the second half of the season and that is the business end.