Liverpool players have been paying tribute to captain Steven Gerrard after the midfielder announced he will leave Anfield at the end of the season.

The midfielder joined Liverpool’s youth system back when he was eight years-old and has gone on to make almost 700 appearances for the Reds, scoring 180 goals in all competitions, and has lifted 10 major trophies including the Champions League in 2005. 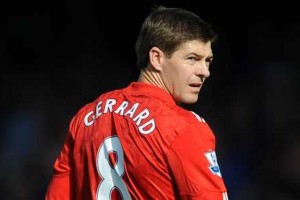 With such an influential figure set to leave the club, it’s no surprise that many of the current Liverpool squad having been paying tribute to the midfielder, with Raheem Sterling, Daniel Sturridge, Mario Balotelli among those who have had their say on the Liverpool legend.

“Stevie will always be a legend. Not just for Liverpool but to England as well. He will go down in history as one of the best midfielders in the game. He’s just unbelievable every day, a great leader and the perfect example for every young player around the country” said Daniel Sturridge.

The Jamaican-born Raheem Sterling also heaped praise on a player he feels played a huge role in developing his career. He added that being captain he always checking up on his progress.”There is no doubt that he is an inspiration for youngsters,” said the young England international.