Terry wants Chelsea to step up

The Blues skipper John Terry is chasing success on all fronts this season,  says the current crop of Stamford Bridge stars need to win silverware to be considered greats.

Jose Mourinho will take his Blues to Liverpool tonight for the first leg of their Capital One Cup semi-final clash, having witnessed a fine performance and 5-0 win at Swansea on Saturday.

That result, coupled with the current champions Manchester City losing to Arsenal, leaves Chelsea five points clear at the top of the Barclays Premier League. 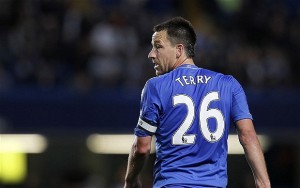 As, they will also face a home FA Cup fourth-round tie with Bradford at the weekend, with their Champions League last-16 clash with Paris St Germain also on the horizon.

The Englishman wants the club to fight for every title available as the class of 2014-15 look to add their names to the Chelsea history books.

“We’ve got top, top players but, as I’ve said before, until we go and win things, it’s not there yet,” said Terry.

“That will be the test. We’ve shown during the first half of the season that we’re capable of pushing the top sides and that’s what we aim to do.”he added.

The former England Captain said there is a motivation in the dressing room to win the league and push on in the Capital One Cup, Champions League and FA Cup.