The Beach Volleyball Low down 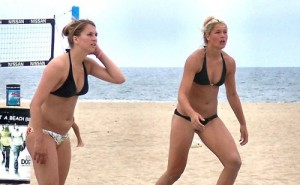 Since the first modern Olympics in Athens in 1896, the range of events on show has positively widened. Next year around 17,000 athletes will descend on London for the duration of the Games. They will compete in a total of 26 different events, which are in turn split into 39 disciplines with everything from Athletics to swimming to the lesser known events such as Taekwondo and Water Polo.

So how about Beach Volleyball? It may seem an unusual sport to be gracing the big stage in London but Beach Volleyball made its debut at the 1996 Olympic Games in Atlanta and in the 8 Games since, the United States has won a gold medal at every event in either the men’s or women’s discipline. In 2008, they took a clean sweep in both categories and continue to dominate the international beach volleyball circuit.

Beach Volleyball has similar rules to indoor volleyball with the aim to get the ball over the net into the opposition’s half of the court with a maximum of three touches. However, the main difference is that teams are made up of two players and the surface is sand. Matches are decided in three sets with the first to 21 winning the first two and 15 points to win the final and deciding set.

There will be an impressive 96 athletes competing across the board in beach volleyball, with 24 teams of 2 in the men’s or women’s categories. The format for the competition will be a preliminary round, where the teams will be divided into 6 pools, and then the winners and runners up will be decided after a total of 16 teams have progressed and played in the knock out stages.

Horse Guards Parade, the location for the event provides a historical backdrop to London as well as playing host to the competition. Not only is it situated at the heart of Whitehall, central to political activity, it is also only a few minutes from Buckingham Palace. Usually the home to parade’s such as the Trooping of the colour and taking its name from the soldier’s who provide security to the monarchy, Horse Guards Parade will be covered in sand and 15,000 seat to be transformed into London’s makeshift beach for the Olympics!

British hopes for Women’s Beach Volleyball triumph lie in the hands of top-ranked pair Zara Dampsey and Shauna Mullin who are currently 32nd in the world. Before the London 2012 showdown they will be battling against British rivals, Denise Johns and Lucy Boulton, who hope to steel their place at the top of the British pecking order before the final team is announced next July.