The Gunners forward, Theo Walcott will not set himself any ambitious goals as he plots a steady return to full match fitness.

The 25 years-old made his first start in a year in the FA Cup third-round tie 2-0 win against Hull, and produced a few positive runs behind the defence despite lacking a finish in the penalty area.

Walcott’s rehabilitation now almost complete, first from the serious knee injury which shattered his World Cup dreams last summer, and then a groin problem sustained on international duty with England in November. 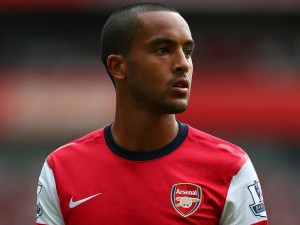 He now feels that achieving the small targets can help in making the biggest difference.

“I like to work week by week, so I forget about the big picture and the nine months [out]. Week by week, hitting the goals and when you have achieved that, you can feel good about hitting something else,”said Walcott said.

The England international said that we need to just come into training with a smile on our face, enjoy it and that’s all we can do. He remember when he had one of his injuries before, he came in down in the dumps and his rehab seemed to take so much longer.Walcott’s start against the Tigers was his first start in over a year.