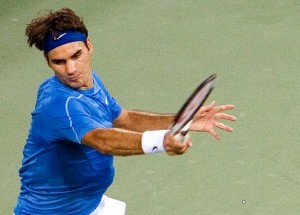 As Roger Federer completed his final group A match against Mardy Fish to make it three wins out of three in the ATP Tour Final at the O2, its seems there has been a rekindling of the passion and fire many have not seen often this year. Since his exit as runner up in the French Open final earlier in the season, Federer has seemed to struggle to find any consistent form, failing to reach the final both at Wimbledon and the US Open and falling to number 4 in the world behind Djokovic, Nadal and Murray. This lead to many questions being asked of Federer’s long term place at the top of the mens game. He has previously stated his intent to compete long enough so he could play for the gold medal in the Olympic games, for which the tennis event is being held at Wimbledon. However, another year will bring with it new difficulties to face for the aging legend.

Federer himself is well aware of this, however, none of this seasons results seemed to be hanging over his head when he defeated Fish 6-1, 3-6, 6-3. This was after a two set demolishing of world no.2 Rafael Nadal where Federer showed off all his natural flare and elegance to transform himself into the World No.1 player he had been for so long. For now at least, he seems to be on song, and that means going into next season he will still push towards winning grand slam titles, and if he keeps up this type of form surely we are left with a top 4 like one that has never been seen before in the mens game. A top four with unrivalled quality and skill, and which each player carrying their own brand of tennis. Not only this but also each player could be the perfect talisman of the sport, with the ATP Tour World final showing off some of the most gracious and humble players in the world. Federer perhaps could be the most highly rated sportsman in the world, especially after the fall of Tiger Woods.

So what does a more competitive top four mean for tennis fans? Well all in all it means more unpredictability. It means there well no longer be Nadal-Federer finals pretty much guaranteed (although those finals were never a disappointment). It means also that players such as Murray will have to work harder than ever to keep up with the other 3 players, and in effect this should happen to everyone of the top four therefore giving us a group of players that only improve as the years progress. This could even persuade Federer to keep improving and competing at this high level, know his rivals will have an easier path to the final if he is not there, which I’m sure everyone agrees is a good thing for both the fans and the sport.