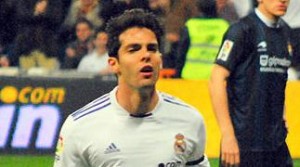 After spending an increasing amount of time on the sidelines, Tottenham are the latest club to be linked with Real Madrid midfielder, Kaka, with a view to a January bid.
The 29 year-old has been put up for sale by the La Liga giants, who are looking to regain some of the £57m they paid for the player, who has failed to reach his expectations at the Santiago Bernabeu.
According to reports, Jose Mourinho is willing to part with the Brazilian international, who no longer figures into his long-term plans at the club.
Those reports have also suggested that the Spanish outfit would sell the playmaker for £25m, less than half than the sum Madrid paid for his services nearly three years ago.
The news comes mere days after Harry Redknapp stated that the North London side would make a ‘major signing’ in the January transfer window, something Kaka certainly has the potential to be when playing at his best.
However, the Spurs boss isn’t about to pay at the first offer and will be looking to sell some fringe players before he makes any big-money moves of his own.
Among the players said to be on their way out of White Hart Lane are the likes of Roman Pavlyuchenko, Steven Pienaar and Niko Kranjcar.
The trio have been linked with January moves away from the club, and would bring in an estimated £15m if all were sold on permanent deals.
Another task Redknapp has on his hands is holding on to the contract of talisman, Luka Modric.
The Croatian star continues to be associated with a move to Chelsea, despite player and manager alike stating that they are happy for Modric to remain with his current club for the remainder of the season.
Although Kaka has failed to replicate his Ballon d’Or winning form of 2007 during his time with Real Madrid, the South American could prove valuable if a new manager were to squeeze the best out of him and join a Spurs midfield that is already of a world-class standard.