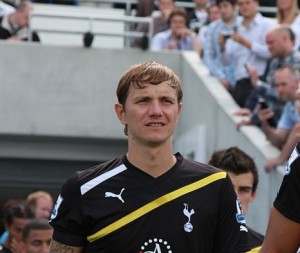 Roman Pavlyuchenko’s agent has publically criticised Tottenham, claiming they have priced the striker out of a move away from White Hart Lane.

Marseille’s Loic Remy has emerged as one of Harry Redknapp’s key targets, as he is eager to add to his attacking options, but knows he will have to sell to buy.

Redknapp has admitted he is desperate to keep hold of Jermain Defoe, therefore leaving Pavlyuchenko open to leave, should a club bid the right amount of money.

Tottenham chairman Daniel Levy has admitted that he does not want to make a financial loss on the Russian international, whom they paid £13.8million in 2008 from Spartak Moscow.

And Pavlyuchenko’s agent, Oleg Artemov, is becoming increasingly frustrated, as he said in the Sunday Mirror: “We can’t agree about the price with Mr Levy.

“He values Pavlyuchenko according to his own gauge.
“This is by how much the club spent, his goals and he also wants some profit on him. I don’t really know how he’s counting.”