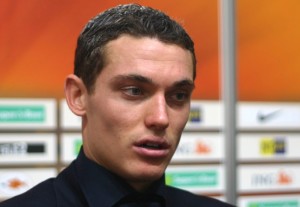 Arsenal defender Thomas Vermaelen suffered a knock against Bolton Wanderers on Tuesday evening after playing 84 minutes in their Carling Cup clash versus Bolton Wanderers but manager Arsene Wenger dose not believe the injury to be too bad.

The Belgian centre-back had been out for almost two months but returned on Tuesday to help Arsenal onto a 2-1 win that takes Wenger’s side into the quarter finals once again.

The Arsenal manager has admitted that tests on the player would be carried out on the Wednesday but first impressions suggest he could be available for the Chelsea game but is unlikely to be used until he is back to 100% fitness.

“He will be a bit short for Saturday, I don’t know yet what I will do. We have to test him tomorrow, but it doesn’t look too bad. He has been out for a long time, he had only one training session yesterday (Monday) with the team. I didn’t really expect a game of that intensity, it was a tough one for a centre-back.”

Wenger also admitted that the high intensity of the game put pressure on the player who had not featured for such a long time.

“They put us under pressure in the second half and the intensity of the game was very high. We don’t think it is a calf strain, it is just tight calves. He has not played a proper game for two months. He wanted to come off.”

“In fairness, I did not want to take him off because I thought it was too stupid now with four minutes to go to concede a goal. He was adamant he couldn’t go on so I hope it’s not too bad.”