Wenger branded Lukas Podolski move to inter as a “joke”

Inter boss Roberto Mancini has confirmed yesterday that they want to sign Arsenal forward Podolski in January as they look to do a loan deal.

“Podolski is a good player. He is part of a list of players that we are following, so we will see what will come of it.”said Inter Boss, Mancini.

But Today The Gunners boss Wenger hit back angrily today after accusing Inter of being “all talk” and no action as it is also understood they are not impressed by the prospect of a loan rather than a permanent deal.

He said it is a joke as Inter Milan is not serious. It is nothing serious, they just talk He added that there is no such plan and he is hopeful the German star will be an Arsenal player at the end of January. 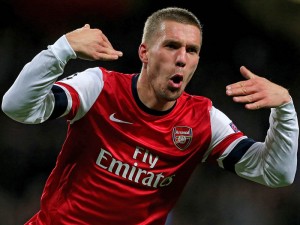 Podolski has become a bit part player at Arsenal and he is frustrated at his lack of first team chances but may get a chance with Danny Welbeck a doubt for the New Year’s Day trip to Southampton with a thigh problem.

“We have one alert after the game at West Ham and that’s Danny Welbeck. He could be short for Thursday. [He has] a thigh problem” said wenger.